Our founders, Jamie Danek and Michelle Mitchell, started Humm (then Kombucha Mama) in 2009 on foundations of accessibility, sustainability and positive energy, with the intention to give people everywhere the opportunity to try our tasty kombucha. Today our fun, fizzy and flavorful drinks are available in all 50 states – and now in Sweden, Canada and Guam.

When we began brewing, kombucha was still considered something of a novelty, and was mostly found in health food stores and natural markets. We made a point to reach out to more mainstream retailers, believing that kombucha was much more than a niche product and could thrive with more exposure. In the ensuing years, we’ve gone from hand delivering gallon jugs in a Prius to supplying some of the world’s biggest retailers, including Target, Costco, Natural Grocers and Walmart.

We’ve differentiated ourselves with innovative, mouthwatering flavors (including Pomegranate Lemonade, Lemon Ginger, Apple Cinnamon and Coconut Lime, and seasonal offerings Hopped Grapefruit and Chai), by using only the highest-quality ingredients and with a first-of-its-kind kombucha tap room where visitors and locals can sample brews and fill up a growler.

Our beautifully-crafted amber glass bottles feature rippling waves which evoke the movement and energy of the beverage and company, a resealable cap and a label with so many cool illustrations that you’ll find yourself pondering it long after you’ve finished the liquid inside.

We’re proud to be the Official Kombucha of the Seattle Seahawks. Humm is the first kombucha company to forge a relationship with an NFL team. And it turns out football fans love kombucha! 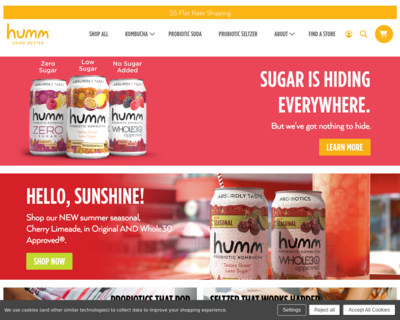